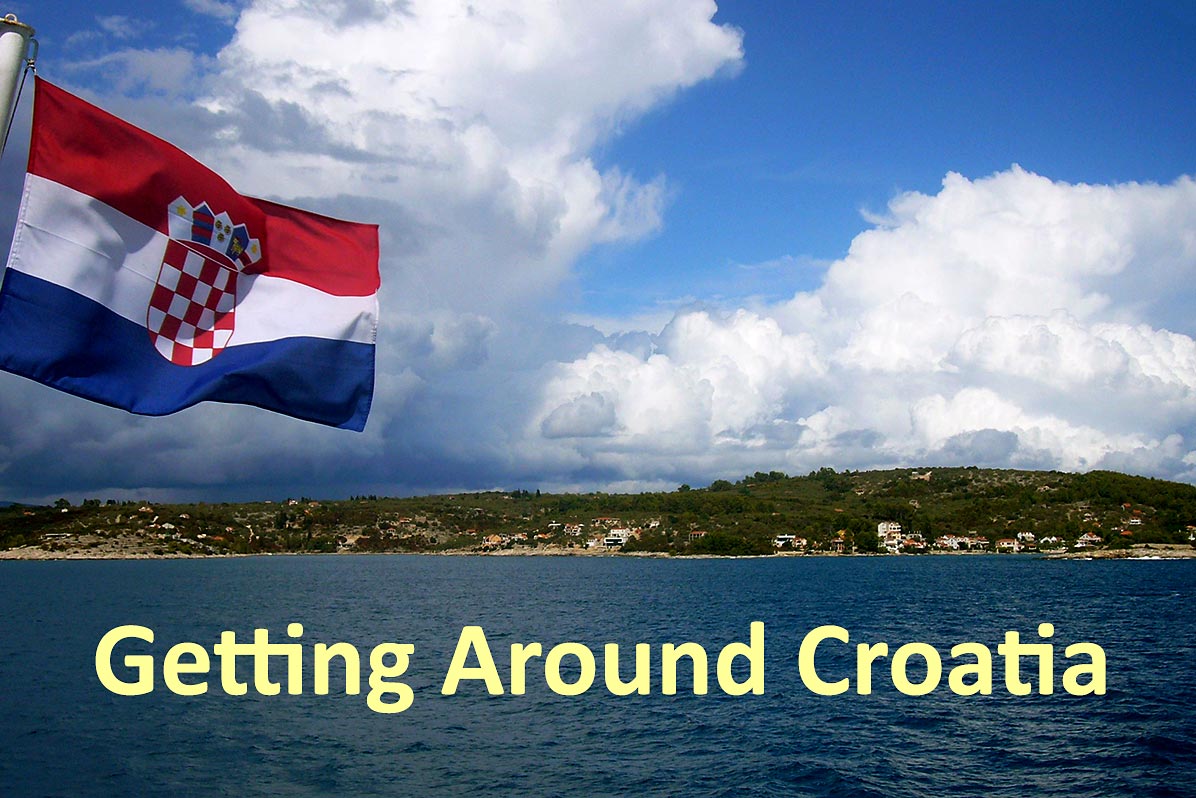 Home » Getting around Croatia

Croatia is a fairly small country that features over 1700 km of coastline and hundreds of islands. Getting around Croatia is fairly straightforward if you plan your transport in advance. The transport options include flying, driving, bus, ferry, taxi, uber and private transfers. Here is what is available:

Croatia has a very good public transport network that includes a large network of buses and numerous short and longer ferry crossings. Between some places, you can also fly or take a train, however, both networks are not as extensive. Driving is a good option as the roads are good and in tourist season they are clear and easy to use. Besides public transport, traveling around the coast includes also private speed boat transfers and mini cruise options.

The fastest and probably easiest way to get around Croatia is to fly to your destination. However, there are only several airports in the country – Zagreb, Osijek, Pula, Rijeka, Zadar airport, Split (travel info) (airport info) and Dubrovnik, so this option is limited to these places.

Smaller airports such as Brac offer a very limited number of flights in summer only. Croatia Airlines is the only domestic air company with limited schedules (domestic flights as scheduled just a few times a day). Prices can be pretty high especially for last-minute flights or in high season. Try to book well in advance for possible budget fares.

When is the plane the best travel option

If your itinerary is to visit Zagreb, Plitvice Lakes, and Dubrovnik, flying is a good option. If you fly from Zagreb to Dubrovnik or vice-versa, you will be there in 45 minutes and the average flight fare between Zagreb to Dubrovnik is about 100 Euro. Driving or taking a bus between these two places will take you hours and would include crossing the Bosnian border (hassle!). Things changed since Peljesac Bridge come into operation which make driving to Dubrovnik much faster.

The fly-and-drive option is good for some other itineraries such as, for example, visiting Istria, Plitvice, and Dubrovnik. Take a flight from Pula to Zagreb, drive to Plitvice Lakes and back, drop off your car at the airport, and take a flight to Dubrovnik. This can save you a lot of time particularly if you are trying to visit as many places in Croatia as possible in a very short time.

Getting around Croatia by bus

Buses are very good options for public transport in the whole country. They are frequent, even in the offseason, the prices are moderate and schedules are well adjusted for further travels.

The Bus network in Croatia is large. Almost every single village is connected by bus. The main bus terminals or small village stations are easily accessible by either local public transport or are within the walking distance of the town center. Most of the buses also take bicycles. Bear in mind that you have to pay extra for additional luggage, packages, or bicycles.

There are dozens and dozens of small and larger bus operations in Croatia and they tend to create their own schedules. For time being, there is no one place or a website where you can find the comprehensive bus schedules for the whole country, so you would need to check several websites.

Use the Arriva site for the most comprehensive listings across the country. Zagreb and Split Bus Stations (Autobusni Kolodvor) have a good overview of buses to/from Split and Zagreb. Also, check smaller operators such as Libertas for Dubrovnik, Promet for Split, and Liburnija for Zadar.

When is the bus the best travel option

If you are planning to tour around Croatia, driving is your best option. Depending on your plans, you can drive here or take a rented car to the airport. If you drive, you can reach most of the destinations in Croatia within 3 or 4 hours max. Let’s say, Split to Dubrovnik is 4 hours drive, Split to Zagreb is 4 hrs drive, 3 hours to Zadar, 2 hrs to Sibenik, and so on… The longest drives are between Istria, Zagreb, and Dubrovnik which can take between 6 and 12 hours. An article about getting from Pula to Dubrovnik explains it well, see here.

When is the car the best travel option

Note: The car is not always the best option if you are in a hurry. Consider traffic jams and parking coast and facilities especially in the larger towns. The best alternative is a private transfer or taxi.

Getting around Croatia by ferry

In the coastal part of Croatia and around the islands, ferries are a way of life and an essential part of any travel. If you visit Dalmatia, Zadar, Split (the ferry map), or Dubrovnik, you will most probably travel by ferry at least for a part of your journey.

Ferries in Croatia are part of the subsidized public transport. They are run by several ferry companies that serve car ferries as well as foot passenger ferries. Ferry tickets are bookable online or over the counter in the port’s ticket office just before your departure. If you are a foot passenger, the ferries are cheap. If you are getting on a ferry by car, that can be expensive.

Most car ferries operate on a first come – first serve basis, which means you need to join the queue to wait for your place on the ferry. More info about how to travel by ferry is on the info page about island hopping in Croatia.

Bear in mind that out-of-season ferries are not as frequent as in June to September period.

When is the ferry the best travel option

Note: The ferry is not always the best option to visit the islands. Consider taking a bus that will take you from A to B without getting out of the port to get on the ferry. Buses, of course, to reach the islands embark on ferries, but your fare includes ferry crossing too.